This page covers inviting players to join a Storium game.

When you’re ready to start adding players to your game, Storium gives you four different methods. You can use any or all of them, and you can invite anyone you want, even if they’re not on Storium yet! 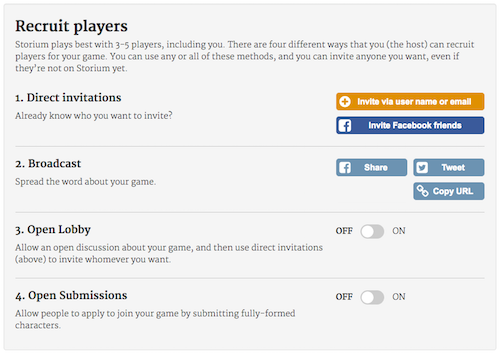 Direct invitations are the simplest way to get people into your game. If you know someone you want to play with, you can send them an invitation with just a few clicks.

Broadcast allows you to spread the word about your game via social media, web sites, and other channels.

Open Lobby lets you create an open discussion space where anyone can talk with you about your game idea.

Open Submissions allows anyone to apply to join your game by creating and submitting a fully-formed character.

We’ll now cover each of these in a bit more detail. 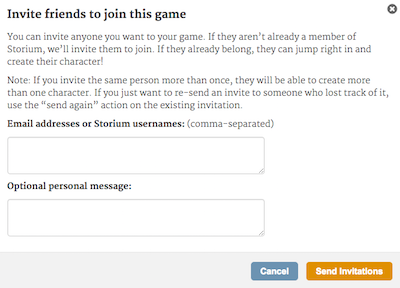 The invite process is almost entirely automated; Storium takes care of the details for you. We’ll send an email to the invitee and give them a special link that lets them sign-up for Storium (if necessary) and join your game by creating and submitting a character.

Note that the people you invite don’t need to be Storium users or backers! They can join your game for free. (If they want to start their own game, they will need to become a backer.)

If a player submits a character that doesn’t seem to fit the spirit of your game, you can request revisions. The character will be “bounced back” to the player, along with any comments you choose to attach.

If a player joins your game after it has started, they won’t be able to play util you review and approve their character. This gives you, the host, a bit more control over the process, since the story is already underway and it’s important that the new character fits in.

The Broadcast interface makes it easy to spread the word about your game, attracting the attention and interest of potential players.

Additionally, the “Copy URL” button gives you access to your game’s URL. You can then copy this and paste it anywhere you like: in an email, on your blog, or anywhere else on the Internet that makes sense for you. If either Open Submissions or Open Lobby (see below) are turned on, people who click this link will be able to either apply to join your game or discuss the game with you, respectively.

Sometimes you might want to host a game but you either don’t know who you want to play with, or you don’t quite have your game idea fully figured-out, or both. That’s OK! In fact, sometimes it can be great because it gives you the opportunity to build your game in a truly collaboratively manner.

To better support and encourage this style of play, Storium offers a feature called “Open Lobby.” When you turn this feature on, your game will be publicly listed on the “Looking for players” page. This is a place where any Storium user can go to find games that are looking for players.

When players click on your game they’ll be taken to its Green Room, where they can view the game’s description, settings, and any existing characters and players.

When Open Lobby is turned on, visitors to the Green Room also see a “Lobby” tab. The Lobby is an open discussion area where anyone can publicly communicate with the host and the game’s existing players. This is a great way for you to find and qualify potential players. Use it to ask them about their character ideas or to clarify for them exactly what you’re looking for. Vistors might even have ideas to offer that make your game better.

If you end up finding anyone whom you’d like to invite to join your game, you can do that using a direct invitation. As host, you can turn the Open Lobby off at any time. Any messages posted there will remain, but the Lobby will no longer be available to anyone who is not playing your game.

When you’ve got the number of players you’re looking for, be sure to turn off the Open Lobby feature. Otherwise, it will expire automatically after two weeks (at which time you can turn it on again, if you so desire).

Note that while Open Lobby is turned on, anyone can view your game’s Green Room, but they cannot see the discussion tab — it remains private to your game’s participants.

Another way to attract players is to turn on Open Submissions. Like Open Lobby, this causes your game to be listed on the “Looking for players” page.

When visitors click on your game they’ll be taken to its Green Room, where they can view the game’s description, settings, and any existing characters and players.

When Open Submissions are turned on, visitors don’t need to wait for a direct invitation from you. Instead, they can apply to join your game by creating and submitting a complete character.

Unlike with players you invite yourself, you must approve characters that come in via Open Submissions. This protects your game from being flooded with new players whom you don’t want or don’t have room for. If you permanently reject an applicant (by selecting “No, thank you”) they will be unable to re-apply.

When you’ve got the number of players you’re looking for, be sure to turn off the Open Submissions feature. Otherwise, it will expire automatically after two weeks (at which time you can turn it on again, if you so desire).

Note that while Open Submissions are turned on, anyone can view your game’s Green Room, but they cannot see the discussion tab — it remains private to your game’s participants.

Return to table of contents