This page explains how to start scenes in Storium.

Anatomy of a scene

Every game on Storium unfolds just like a book or a film: as a series of scenes. A scene consists of: 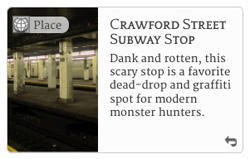 A scene can have one Place card. It helps describe the location where the scene plays out. If a Place card has an image, that image can be used for the scene image (or the narrator can upload their own). This makes it easy to add visual appeal to a scene.

Most scenes should include one or more challenges. Challenges establish the dramatic tone and scope of the scene by describing hurdles that the other players must overcome in the story. Challenges can take the form of two kinds of cards:

Character cards represent people who hinder the players or want something from them. Examples could include a guard blocking your way, a villain threatening an innocent, or even a friend asking for a favor.

Obstacles represent anything else that gets in the player’s way. Examples could include a trap, a difficult surgery, or a hidden piece of evidence.

Every challenge has points. These are the number of cards that players must play to overcome the challenge.

The maximum number of challenge points in a single scene is limited by the number of players and the number of cards they have available to play. This number is set when each scene begins.

Player can only play a total of three cards per scene, so usually the maximum number of challenge points in a scene is three times the number of players. But this number can be lower if any of the players have less than three available cards.

In the first scene of your game it’s probably best to play a single challenge with a limited number of points. This ensures that your fellow players’ first experience is a positive one, something that they can handle with confidence. Remember that they’ll still be learning who their characters are getting a feel for the world you’re all playing in together. Go easy at first; you’ll have plenty of time to challenge them in the scenes to come! 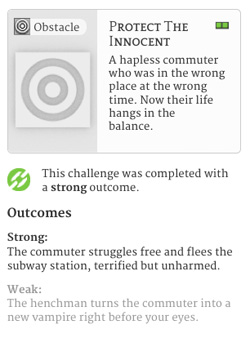 When a player overcomes a challenge by playing the final card on it, they can sometimes win control of the story — specifically, they can narrate not only their character’s actions but also how the challenge turned out. To guide them, every challenge has outcomes, which are brief guidelines provided by either the author of the game’s world, or by the narrator.

If more Strength cards were played on the challenge than Weakness cards, the outcome of the challenge is strong. Usually this means that things worked out well for the players. The player gets to write what happens, using the narrator’s provided “strong” outcome as a guide.

If more Weakness cards were played than Strength cards, the outcome of the challenge is weak. This means the challenge was overcome but at a cost, or with an interesting complication. The player still gets to write what happens, using the “weak” outcome as a guide.

If an equal number of Strength and Weakness cards were played — or if none were played at all — then the outcome is uncertain. This means the challenge was overcome but the narrator (you) gets to say what happened as a result.

Asset, Goal, and Subplot cards don’t count as either Strengths or Weaknesses. They simply count as a challenge point. Thus, these cards help the players finish challenges but don’t help them steer the story towards one outcome or the other.

It is therefore in the player’s interest to play either Strength or Weakness cards on challenges they really care about, since both strong and weak outcomes earn them some control over the story. As narrator, you should encourage this and celebrate it when it happens

Writing outcomes is a bit of an art form. Outcomes are your chance to steer the story in one of two specific directions while letting your players do the actual driving. As such, you want to offer your players opportunities without prescribing the details of how those opportunities unfold. We often find it helps to ask questions and offer choices in your outcomes, because these hint at the sorts of directions you’d like the story to take without shutting-down your players’ creativity. For example, this Weak outcome:

You get away in time but not without complication. Does the blast damage the ship? Or does it throw you off-course? Pick one and tell us how it goes down.

...is probably better constructed than this one:

You get away in time but the blast blows a hole in the ship and knocks you off-course.

In a story it sometimes makes sense to offer the players choices and opportunities in the form of cards. If a scene introduces or makes available something of value to the characters (say, a weapon, or a key, or a piece of important knowledge) you can play Asset cards which players can then pick up when they make their moves. Similarly, you can play Goal cards to give players optional tasks to take on — tasks that you feel might move the story in an interesting new direction.

You can’t force players to pick up cards, but they have strong incentives to do so. Asset cards provide players with an easy way to complete challenges. And when players finish playing all their Goal cards, they get a reward: a bonus Wild Strength card.

Note that when you play cards for pick-up you are actually playing a stack of identical cards. Each stack can be picked up — in its entirety — by a single player. So if you want to make the same Asset or Goal available to more than one player in a scene, you need to play multiple stacks of the same card. 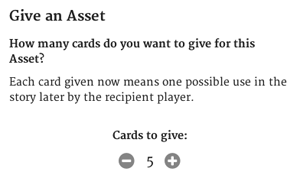 You can also give Assets and Goals directly to players, instead of making them available for pick-up. This is most useful for giving the players rewards for their characters’ actions. For example, a player’s move might describe how they defeat the guard and steal their keys. Giving that player Asset cards representing the keys would make perfect sense.

Take care not to overuse this feature. Players can re-write an Asset stack by sacrificing one card. And once a player uses up all the Goal cards in a stack, they automatically get a bonus wild Strength card. Both card types are thus powerful narrative tools, even though the cards themselves do not tilt Outcomes in a certain direction. 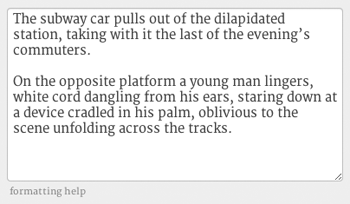 Once the narrator has played their cards, they complete the scene establishment by writing the scene text. This is the actual narrative that describes what happens in the scene. It should be inspired by and directly reflect the cards that were played.

Storium supports a subset of the Markdown format, which gives you an easy way to add simple styling (such as italics, bolding, headers, and lists) to your story. You will find a tip explaining this just below the text entry area.

After you have published a scene, you can edit your portions of it at any time. Scene text can be fully edited, but card plays can only be edited if your desired changes do not cause conflicts later in the story. For example, if you started a scene by playing a card for pickup, and then a player picked-up that card when making their move, you won’t be able to undo the fact that you originally made that card available.

If you plan to make edits in a scene, we recommend doing as soon as possible. The longer you wait, the higher the chance that your changes cause frustration for players who have already begun writing their own moves, only to find them made obsolete by your changes.