This page explains how to make moves in a scene of a Storium game.

Anatomy of a move

Once a scene has started, players each make one or more moves. Moves describe how a character responds to the scene’s challenges. Players make moves by choosing a challenge and then playing one or more of their own cards on it. Moves are made up of the following:

The first step in making a move is choosing a challenge. Each move can address only a single challenge. This helps you focus your writing — and your character’s actions — on one clear objective at a time.

Challenges take the form of either Character or Obstacle cards played by the narrator. You can choose any challenge that has not yet been overcome in the current scene. 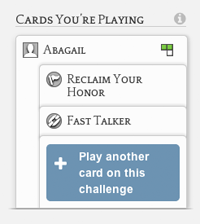 As a player, the purpose of your cards is to overcome the scene’s challenges.

Every challenge in a scene has a certain number of challenge points. The more points, the harder the challenge. Each card that you and your fellow players play on a challenge addresses one challenge point. Storium keeps track of these numbers so you don’t have to.

You can play a maximum of three cards per scene. Storium keeps track of this, as well.

Winning control of the story

In Storium, the combination of cards that you play can win you control of the story! This means you get to take the microphone and say what happens. It’s one of the things that makes Storium different from other games you might have played. So how does it work?

When you overcome a challenge by playing the final card on it (thus addressing its remaining challenge point), you can earn the right to narrate not only your character’s actions but also how the challenge turned out. To guide you, every challenge has an outcome, which is brief a written “tip” provided by either the author of the game’s world or by the narrator.

If more Strength cards were played on the challenge than Weakness cards (either by you alone, or in concert with other players), the outcome of the challenge is strong. Usually this means that things worked out well for you and your fellow players. You get to write how the challenge turns out, using the “strong” outcome tip as a guide.

If more Weakness cards were played than Strength cards, the outcome of the challenge is weak. This means the challenge was overcome, but at a cost or with an interesting complication. Weak outcomes are still great because you still get to write what happens, using the “weak” outcome tip as a guide.

If equal number of Strength and Weakness cards were played — or if none were played at all, meaning that only Subplots, Assets or Goals were played— then the outcome is uncertain. This means the challenge was overcome but the narrator gets to say what happened as a result. This means you’re only allowed to write about what your character did, and not about how things turned out.

It is therefore in your interest to play either Strength or Weakness cards on the challenges you really care about, since both strong and weak outcomes win you some control over the story!

Wild cards are special Strength and Weakness cards that give you the power to grow and change your character as the story progresses.

You start the game with two wild Strength and Weakness cards each. Wild cards are essentially blank; you fill them out when you play them. This allows you to add useful details to your character on the fly: previously-undisclosed abilities and skills, or fears and limitations. This can be incredibly useful because it lets you improvise to help your character overcome the story’s challenges.

But you know what they say: “with great wild card comes great responsibility.” You can only write wild cards that make sense for your character, for the world, and for this moment in the story. For instance, if you’re playing a story set in the Old West, you should not write “Cybersamurai” as a wild Strength.

If you write something that the narrator thinks is inappropriate, they can always request that you change it. So stick to the spirit of the game and use this power wisely! 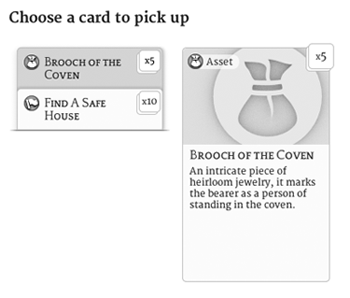 A stack of Asset cards represents something of value (say, a weapon, or a key, or a piece of important knowledge) that you can use to affect the story. Once you’ve used up all the cards in the stack, you can no longer use that Asset to overcome challenges (although, in the story your character may still possess it).

A stack of Goal cards represents an optional task you choose to take on. Every time you play one of these cards, you are saying that your character is working toward that Goal. Once you’ve used up all the cards in the stack, you earn a reward for having worked towards the Goal, whether or not you actually achieved it. The reward is one free wild Strength card — a hugely useful prize!

Giving Assets to other players

Storium allows you to give a stack of Asset cards to another player. This needs to make sense in the story. If the two characters are far apart, or if the Asset is something intangible (like knowledge) then you should be careful in how you use this feature. The story should always come first.

You can give a stack of Assets to another player in the course of making a move. Click "Browse your cards," select the Asset stack you want to give, and then click "Give to another player."

Sometimes, in the course of the story, an Asset you hold may no longer make sense. Maybe your character had a “Pistol” Asset, but then the mobsters disarmed her. Or perhaps the secret passcode your character memorized has just been changed by the bad guys.

Storium helps you roll with these situations by allowing you to re-write a stack of Asset cards. When you do this, you must sacrifice one card from that stack. Essentially, you give up one possible use of that Asset in the story, in exchange for the power to transform it into something more useful.

Again, the story should always come first. Don’t re-write your Asset in a way that doesn’t make sense for the situation at hand. If the narrator thinks your choice wasn’t in the spirit of the story, they can request that you try again.

In the course of play you may find that your character has accumulated cards that you simply can’t make good use of. Perhaps you chose a Subplot or Goal that no longer makes sense for the direction in which the story is headed. Or perhaps you picked up an Asset that you no longer want.

It’s no fun to be stuck with cards you can’t use, so Storium allows you to drop certain stacks of cards. To do so, look at your cards when making a move. You’ll find a “Drop” button shown for each Asset, Goal, or Subplot stack that you’re holding.

Note that every character must always have a Subplot, so if you drop your current Subplot stack you’ll need to choose a new Subplot at the start of the next scene. 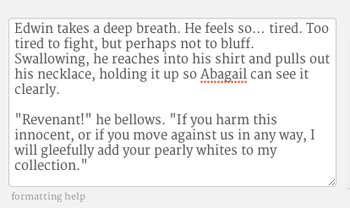 Once you have finished choosing a challenge and playing your cards, you finish your move by writing your move text. This is the actual narrative that describes your character’s actions and, if appropriate, how the overcome challenge turned out.

Be sure to work into your writing any cards that you have played, picked-up, or given away. Let the cards guide and inspire you — that’s what they’re there for!

After you have published your move, you can edit it at any time up until someone else makes a move of their own. That said, it’s usually best to make any changes as soon as possible. The longer you wait, the higher the chance that your edits will disrupt other players who are in the process of writing their own moves.

Once someone else moves after you, your move is locked down. From that moment on, you can only edit it if the narrator “requests revisions.” If that happens, you‘ll be able to edit the text of your move. You will also be able to change the cards you played provided that your changes do not create conflicts with any moves other players made after yours.

Next: Growing your character