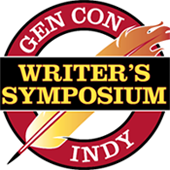 In partnership with the Gen Con Writer’s Symposium, Storium is hosting an event at this year’s Gen Con, and it’s gonna be epic:

Storium turns creative writing into an online multiplayer game, using mechanics inspired by role-playing games, story games, and card games. You can learn more on our homepage and our Kickstarter campaign page.

Your $4 admission fee will go to support Patrick Rothfuss’ charity, Worldbuilders, which uses the collective passion and power of readers, fellow authors, and book lovers to make the world a better place. Additionally, you'll be able to influence the story that Chuck, Sam, Delilah, and Stephen tell by making donations during the game session itself.

Join us for two hours of laughs, absurdity, and a great story told by amazing writers, all for a worthy cause!